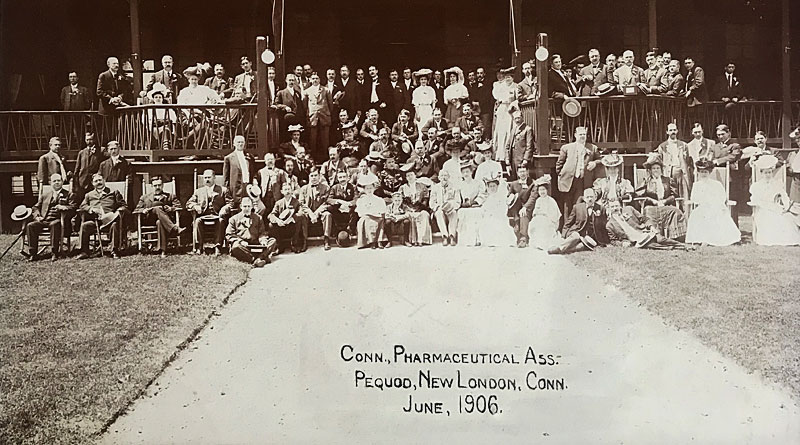 It all started in 1876 when John K. Williams and Alfred Daggett were pharmacists returning home from the 23rd annual APhA meeting in Boston.  They decided it would be a great idea to start a pharmacy association on the state level; New Jersey may have been the very first state association before Connecticut. They sent an invitation to 25 pharmacists in larger cities across Connecticut and met in New Haven on Feb. 9, 1876.  The newly formed Connecticut Pharmaceutical Association drafted a constitution and by-laws with the following objective:

‘…to secure cooperation and concert of action in the advancement and diffusion of a knowledge of Pharmacy and its collateral branches of science, and to promote the elevation of the professional character of, and facilitate and open and fraternal intercourse between, its members.’

Dues were only $2, with an initiation fee of $3.  One of the biggest accomplishments of the CPA in its infancy was the passing of the Pharmacy Act in 1881 through the Connecticut State legislation.  This act created the Commission of Pharmacy, which would oversee the licensing of individuals and growth of the profession.

Throughout the years, the CPA has made some very notable achievements.  In 1888, the APhA asked for a representative from the CPA to join their committee of 5, plus representatives from other state pharmacy associations, to draft the original National Formulary.  It has championed pharmacists’ education and provided many scholarships.  The CPA was a major driving force in the creation of the Connecticut College of Pharmacy in 1925, now the University of CT’s School of Pharmacy.  It has constantly worked to protect the profession’s integrity by urging pharmacists to take pride in their work, to not compete with physicians and each other, and to not have the profession tainted by those who sell liquor under the guise of a pharmacy.

The CPA was always very active in the legislature and has supported many bills, including the Fair Trade Act which sought to protect independent pharmacies from chain drugstores.  Throughout the years, the association has allied pharmacists with many other medical professionals, such as physicians and dentists, so that we may work together instead of against each other.

The CPA has also done some notable charity work.  It organized an Ambulance Plane Bond Drive during WWII, raising $964,390 by Feb 1944 – enough for 6 ambulance planes.  The CPA’s outstanding effort was recognized by the US Treasury Dept with a distinguished service citation.

On a more local level, the CPA was there to help fellow pharmacists when Hurricane Diane hit Connecticut in Aug 1955.  The CPA organized a Disaster Committee to help store owners and distributed over $12,000, much of it collected from local pharmacy organizations such as the Bridgeport and New Haven groups.  More recently, the CPA has participated in the NBC Channel 30’s Health Expo with a booth, and in 2006 the association helped thousands of state Medicaid patients select appropriate Medicare Part D plans.

In the tradition of forging ties with other associations, the CPA, renamed the Connecticut Pharmacists Association to reiterate its emphasis on supporting the pharmacist, launched a new journal, the “Pharmacy Journal of New England”, and co-sponsored many highly-successful “New England Annual Pharmacist Conventions.”

Even then, as today, the profession of pharmacy faced many of the same struggles.  Price cutting was an issue that presented itself many times.  There was also inadequate and slow reimbursement from State Welfare programs; in fact the CPA was engaged in a legal battle against the State Medicaid office in 2001.

Throughout the years, the profession of pharmacy has changed from one of compounding and peddling the pharmacist’s own branded cure-alls to one that uses almost exclusively patented and manufactured dosage forms and now to one that emphasizes the pharmacists’ cognitive skills more than ever.  The profession of pharmacy is ever-changing, and the Connecticut Pharmacists Association has always been right there with it.